<p>By Mark Brooks, November 30, 2019 The aviation industry is the backbone of the global economy, but for years it has…</p>

The aviation industry is the backbone of the global economy, but for years it has been criticized for its climate–warming carbon emissions. In response, the International Civil Aviation Organization (ICAO) is now rolling out CORSIA, a plan to make flying carbon neutral. Carbon offsets, combined with newer fuel efficient aircraft now entering service, will transform aviation into the most efficient-emissions form of passenger travel in many parts of the world. This is especially true in Canada with the large distances between major cities, where the only viable substitute to flying is often driving.

In response to these dramatic improvements, critics point to new research into contrails and how they could potentially be causing more global warming than a flight’s carbon emissions. Why are contrails important and how can a simple Flight Level “EcoHack” being suggested in this article all but remove this threat?

Under the right humidity conditions, aircraft can create contrails as they soar high in thin cold air. Water vapor quickly condenses from the air compressed in a jet engine’s exhaust into ice crystals to form cirrus clouds. These high clouds can last for minutes, hours or even days. Unlike low-level clouds that have a net cooling effect (the heat energy cannot penetrate these thicker layers), all cirrus clouds trap heat, thanks to the ice crystals inside them that reflect back heat radiated from the surface. Cirrus clouds are usually too thin to reflect sunlight heat energy back into space.

Ice crystals in contrails formed by current jet engines are much smaller than those in naturally occurring cirrus cloud, and can take longer to settle to lower altitudes. They can be created at altitudes ranging from 16,500 ft to 45,000 ft but typically occur at altitudes above 25,000 ft. In pilot lingo 25,000 ft is also known as FL (flight level) 250. For contrails to form cirrus clouds, an aircraft would typically need to be flying above FL250 and in the right humidity and temperature conditions. The likelihood of these conditions existing increases in tropical conditions and decreases as you fly further north. Typically, flying at or below FL250 removes the global warming threat created by contrails. This is the Flight Level EcoHack.

In Canada, if you fly below FL250, cirrus clouds from contrails will not form in the first place. Doing simple adjustments like this to reduce global warming while still achieving the goal of moving passengers to a destination is called “EcoHacking”. Passengers still fly safely to their destinations and global warming is reduced by adjusting the flight level based upon temperature and humidity to avoid creating cirrus clouds.
This EcoHack is a simple rule that can be applied by pilots and ATC ( Air Traffic Control ) across the planet. It is also the opposite of everything a pilot has been trained to do.  Pilots are trained to fly as high as possible to reduce fuel burn, minimize real emissions and increase true airspeed.

Efficiency would be reduced if flying was restricted to FL250, with some aircraft burning up to 30% more fuel, producing 30% more real emissions. A far cry from the 2 fold warming effect claimed by some contrail doomsday criers. Getting around weather could also be more difficult so it’s important to validate the contrail science quickly.

Flying is also the safest and fastest way to travel. This combination is turning flying into the preferred mode of passenger transportation with flights expected to triple by 2050. With the FL250 EcoHack, this is still true even if the claim, still being verified, that contrails are a long term global warming issue is true. Alternatively the work being done at NOAA and elsewhere could create an atmospheric model able to predict contrail persistence and enable safe utilization of higher flight levels.

The one big glitch to aviation’s bright future is the lack of aviation infrastructure able to handle the expected three-fold increase in air travel worldwide. Toronto is a classic example of aviation congestion, and the excess fuel burn and emissions this can create. It is time to stop procrastinating and build the infrastructure our growing nation needs. It is time to build Pickering Airport east of Toronto, and expand other airports across the country to maximize the emissions efficiency of air travel. 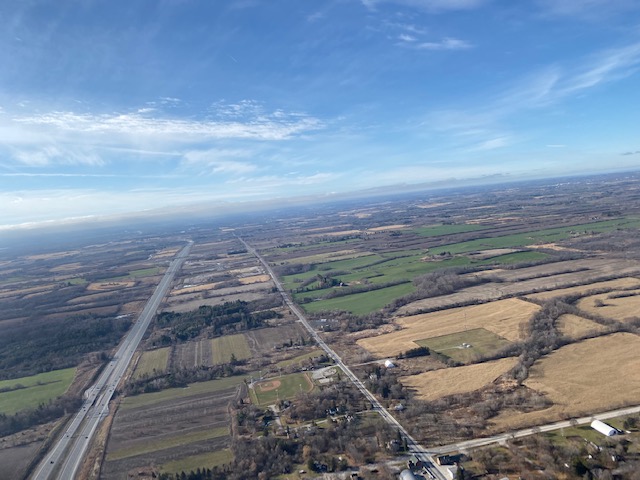 Looking Northwest from the hamlet of Brougham at the public lands north of Highway 7 set aside for a new airport in Pickering East of Toronto. Air travel is now the safest, fastest most emissions efficient way to travel any distance in Canada but requires new infrastructure to support anticipation growth and to reduce congestion.

This site uses Akismet to reduce spam. Learn how your comment data is processed.

How Many Jobs Will Pickering Airport Create?

You may have missed

How Many Jobs Will Pickering Airport Create?

Surprising Aviation facts in the age of Climate Anxiety