A flight arrives at Pickering Airport from Winnipeg.  The passengers deplane, collect their baggage, and face the final challenge of modern air travel, getting from the airport to their destination. Most will proceed either to their private car in the parking lot, a car rental location, the onsite bus stop, to the taxi/Uber/limo pickup stands or to the Metrolinx GO train platform with connections to downtown Toronto.  But a few take a different path.  These take the tram to the airport’s urban air taxi “Vertiport” because their needs and wants to complete today’s travel are different. 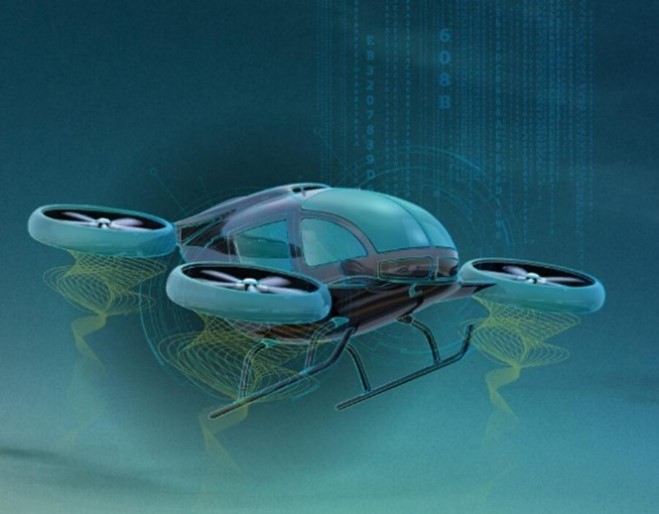 Welcome to 2030 and the Urban Air micro-hub operating as a complementary extension of Pickering Airport, and the newest part of the airport-to-home Last Mile connectivity.

The development of commercial drone technology in the last 5+ years has been startlingly fast.  Once just dreams, there are now working aircraft.  FAA certification of commercial passenger drones is expected as early as 2024.  The introduction of electric vertical takeoff and landing (eVTOL) and electric conventional short takeoff and landing (eCSTOL) commercial drones will be dramatic and disruptive to the Greater Golden Horseshoe region’s aviation network and overall transit systems.

The increasing pace of announcements and demonstration flights from innovative private sectors aerospace companies highlight the scope and pace of eVTOL and eCSTOL technology development.

The Rise of the Flying Car is Finally Happening.

What is a Vertiport?

A Vertiport is a piece of urban infrastructure where quiet and highly maneuverable aircraft and drones, both passenger and cargo, can takeoff and land.  It could be located on top of a building or be a hub close to the passenger areas of an airport.  It can be on the roof of an airport terminal, on the apron or doesn’t have to be at an airport at all.  It could be in a parking lot adjacent to an office building or in a business park. Their design would accommodate passenger drop-off and pickup, possibly ground-based transit connections, parking, and some minimalist form of a passenger terminal.

Here are two conceptual vertiport designs that would operate from the top of a building: 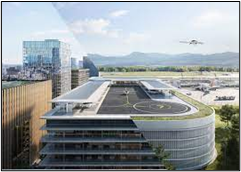 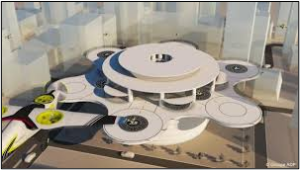 Air traffic could be a mix of piloted, semi-automated, and fully automated aircraft with vertiport configurations depending on the location and type of operation.

The Urban Air network must be based in a large urban area.

Not surprisingly, the success of an UA (Urban Air) passenger system will rely on the opportunity for lots of passengers to use small aircraft on demand to fly to many locations.  A research paper presented in the CEAS Aeronautical Journal (2020) offers interesting insights for success:

The research paper’s findings are transferrable to the Greater Golden Horseshoe region.  Just over 9 million people (almost 25% of the  Canadian population) live within 100 miles of the centre of Toronto.  There are 20 cities with populations greater than 100,000 within a 30-minute UA flight time of Pickering Airport.  Places like London and Kingston would be in the range of 40-90 minutes flying time.

Those 20 larger cities could translate into 20 to 30 public vertiports/UA destinations. In addition, private Vertiports could serve specific businesses, such as a shopping mall, a resort in Muskoka, or a resort like Elmhurst (which already has its own private airport to encourage visitors) could be built to attract visitors.

The figure below shows an urban air passenger network with a 30-minute flying time and a maximum 130 kilometer (80 mile) outer limit  radiating out from Pickering Airport.

Such a network would not be exclusive to Pickering Airport.  Toronto Pearson, Billy Bishop, Hamilton, and Waterloo airports could provide this service too.  And by doing so strengthen the value of the new passenger transportation network.

Why did those few passengers inbound to Pickering Airport decide to use UA taxi services?

Their decision can be reduced to two factors: speed and destination. Time is money when you need to get somewhere quickly.  Processing at the Vertiport will be fast. Like private helicopter aviation today, there will be no extraordinary security. On-demand service means no need to get there 2-3 hours early.  Just buy a ticket online or at the passenger stand, get on and go.

Pre-flight operations will be minimal, and thanks to higher reliability, reduced maintenance costs and a “fuel” cost just 1/10th that of a modern helicopter per mile, the value for time saved will appeal to many, not just a rich few. Urban air ( UA ) passenger drones remove the need to pay for a costly, hard to train, human pilot.

UA taxis provide access to destination that may not be easily accessible via public transit, rail or highway networks.  Passengers will enjoy avoiding being stuck in traffic, reduced transit transfers and other wait times.  The very nature of UA drone technology opens the door to greater network flexibility and opportunity.

For instance, maybe their final destination is Peterborough or Barrie.  Sure, they could rent a car, take Uber and be there in a couple of hours.  Or they could take a UA taxi and be there in less than 30 minutes without any of the ground-based transit or highway hassles.

It may not be cheap, but UA passengers will to be prepared to pay a price for the added convenience and time saved.  The research paper mentioned earlier points to passenger fare price sensitivity.  In that example, at a base fee plus 1€ to 2€ ($1.50 – $3 Canadian) per kilometer fare indications point to lots of daily users on short trips.  At prices beyond that, UA trips drop significantly.  Coincidentally, at an aviation conference, a representative of the Vantage Airport Group, the operators of Vancouver and Hamilton airports and a supporter of UA, stated a fare price equal to Uber Black (base fee plus $2.80 CAD per kilometer) seemed possible.

A quick online check of standard limousine fares out of Toronto Pearson for a 25–30-minute ride shows prices in line with these fares.  But a UA flight will go as straight as an arrow to a destination, free of contortions and gridlock of road systems.

Let’s start with the environmental benefits.  UA drones are electric.  UA, and in fact all electric regional aviation, do not produce greenhouse gases.  The GHG produced by many of today’s alternatives, such as cars and buses, are avoided.  A UA passenger network could take over a small portion of the current on-road traffic volumes further reducing GHGs.  And electric aircraft are much quieter than traditional helicopters and light aircraft, both for those on the ground and the passengers.

A UA network will provide greater travel freedom, for more people, to more destinations. With more destinations available at hopefully reasonable fares, the option for and convenience of air travel within southern Ontario would be available to a greater percentage of the population. With reduced travel times from smaller cities, growth in these communities will see a boost.

Socially, will people accept “Flying Cars” buzzing around their city or region, down their streets, into their business parks, landing on and taking off from tops of buildings?  There could be tens of thousands of trips in southern Ontario each day!  Many will be autonomous – No Pilot!

The pace of economic activity will increase in smaller communities.  It will be much easier for strangers from other parts of Ontario, Canada, or the world, to travel to smaller towns.

These facts could be hard to accept for many people.

Politically, there are two issues.  The first is related to the one above – politicians and government bureaucracies at all levels having to deal with their constituent on this topic.  The second are the three pillars of Canadian passenger aviation. Transport Canada, an organization that tightly and responsibly manages aviation standards and regulations, the Canadian Transportation Agency that handles airline licensing and Nav Canada that provides air navigation services. These agencies are now faced with technology that essentially lets people fly anywhere at any time, and most notably within any city or town.  Nav Canada’s existing air navigation services for passenger aircraft, including control towers and air routing clearances, are build for piloted aircraft.  Can it be adapted for eVTOLs with no pilots in an urban environment?  This emerging technology will severely challenge Transport Canada to manage today’s aviation businesses and aircraft operators, and Nav Canada to provide safe aircraft separation, but they can and will address this.

Certified urban air passenger drones will be reality within 5 years.  It is not unreasonable for an extensive regional UA passenger network to be established in the Greater Golden Horseshoe region in the following 5 to 10 years.

An urban air passenger vertiport should be an important service available at Pickering Airport.