The revelation started with a phone call.

It started as a plea for help from an old friend in Ukraine to a Canadian pilot and aviation enthusiast who was born in Ukraine. In response to the unprovoked invasion of their nation, the young men and women of Ukraine self-organized into citizen defence forces. Tasked with backing up Ukraine’s professional army, they grabbed anything that could be used as an improvised weapon. The old friend was asked by Ukrainian soldiers to find something any Canadian can walk into a store and buy — a drone.

The pilot, a member of the Toronto Buttonville flying club, did some research and then turned to his fellow aviation enthusiasts for help. What his friend needed was not a toy store $50 selfie-taking special, and not the $10 million-dollar US Global hawk with a 12-man support team. What was needed was the type of drones loved by videographers and aviation hobbyists. The type of drone every video game playing youth pretending to be a “Space Marine” takes for granted — a locally controlled real-time “eye in the sky”. Reality is once more following science fiction into a strange new world.

War has always been a driver of aviation technology development. The tragic war of aggression started by Russia on its smaller neighbour Ukraine is no exception. As the David versus Goliath war rages on, possibly for months or even years, the number and types of drones deployed by both sides in the air war is changing and accelerating. One surprise is Ukraine’s use of micro drones (under 10 Kilograms) which appear to be coming of age with cost-efficient large-scale deployment.

The front-line use of micro drones by individual infantrymen is creating a new reality on the battlefield. As with other aviation advances, this technology is taking an unexpected turn and points to future civilian uses that are both terrifying and thrilling. Micro drones deployed in the thousands will enable individuals and businesses of all sizes to integrate aviation into local data collection, logistics and supply chains.

An Invisible Horde of Silent Drones
The western media has made a star out of the Ukrainian Air Force’s larger drones. The most famous of these is the 605 kg Turkish built Bayraktar TB2 with a low radar profile that has often allowed it to evade interception. At $2 million a piece, Ukraine started the war with about two dozen TB-2 drones. These drones are able to fly hundreds of miles to hit high-value targets inside Russian-occupied territory without risking a highly trained pilot or a $30 million dollar aircraft. Since the war began, Ukraine may also have purchased a dozen or more TB2s to replace combat loses. But this is only the tip of the iceberg, a harbinger of a bigger event.

Since the illegal invasion and annexation of Crimea by Russia in 2014, Ukraine’s homegrown artisan drone industry has been in a chaotic process of rapid evolution. It has gone from zero to building full-blown micro combat drones in only a few years on an extremely tight budget. Since Russia’s all-out invasion of the rest of Ukraine on February 24th 2022, the use of micro drones has turned into a fierce aerial Darwinian competition where anything goes.

The Ukrainian regular military is utilizing a number of locally produced militarized micro drones such as the Ukrainian built R18 quad copter. Newly-created volunteer militias and territorial defence units are using anything they can get including donated off-the-shelf commercial quadcopter drones usually made by DJI. A lot of the data collected by these drones is being feed into a home-grown software system providing integrated battlefield intelligence.

Prices for these drones range for $300 to $30,000 based on ability. For less than a $1000, a commercially available DJI drone can provide a combat infantry squad or a local mortar crew with a bird’s eye view of the few kilometres of dirt they are fighting and dying over. Flying for half an hour at a time, these drones are proving invaluable in watching over the movement of enemy and friendly forces. They scout for targets of opportunity, warn of enemy movements and reduce friendly fire incidents. Their video observations help commanders set up ambushes and prioritize who gets the next artillery barrage.

These small electric-powered drones can be carried in a backpack and flown by an infantryman with only a few hours of training, an iPhone and a handheld controller. In a hover between 400 to 900 ft above a battlefield, a small quad drone is often unheard and unseen from the ground yet can see for kilometres. Some can be set to automatically fly orbits or a patrol pattern day and night in all types of weather for up to 10 kilometres away from its launch point. At that altitude, a micro drone can provide direct high-resolution video feed (including thermal images on the more expensive drones) that rivals the best coverage by a $300 million dollar spy satellite or high-flying Jet. These micro drones are too small to be detected on radar or shot down by even the best fighter pilot flying the newest jet.

The Uber of Artillery

Thanks to Ukraine’s integrated command system and Starlink satellite communications, calling in an artillery strike from a battery of howitzers 25 kilometres away is as easy as calling an Uber. With real-time GPS- tagged drone video coordinates, an artillery strike can be validated, prioritized, fired, corrected and fired again all within minutes of observing a target. For the right targets some micro drones are also being used by both sides in a direct “harassment fire” strike role by dropping grenades and small bombs. The worlds first large-scale drone war is underway.

Military professionals and pundits might laugh at the Ukraine’s volunteer citizen soldiers’ “crazy idea” of using small drones assembled from parts purchased on eBay. They may dismiss the stories of a “Toy Drone” bought from Amazon or Best Buy being used as a weapon of war. But in the crucible of combat, that is what is happening, often with modifications and upgrades made on 3-D printers.

As the saying goes, if it works, it is not crazy.

If a drone is spotted from the ground, it can be attacked by small arms and although it is a small target, many have been shot down. A state of the art manned portable missile system has been documented shooting down a small drone, but is it worth it? The missile costs more than the drone. Small quad drones are cheap, easy to replace, quiet, almost impossible to detect with radar and everywhere.

Electronic warfare is reportedly having some success at degrading or knocking out micro drones but often at great risk. Russia started the war with a number of specialized electronic warfare trucks able to jam communications, GPS, video transmission and drone control signals. But to work well they need to be in line of sight of the drone to be targeted. Not a problem if the drone is 15,000 ft in the air but at 400 to 900 ft that requires a defenceless electronic warfare truck to be dangerously close to the front line. Consequently , instead of knocking a drone out, these counter measures are often only degrading the quality of video and command signals. As the dilemma dawned on the Russian invaders, they turned to DJI, the dominate manufacturer of civilian drones worldwide, for solutions.

DJI is based in China and sells software and hardware (called Aeroscope) to enable the tracking of its drones by law enforcement. Russian purchased this system and quickly discovered that the signals from DJI drones where not as encrypted as expected. The Russians have confirmed using Aeroscope, as well as military electronic warfare systems to intercept the unencrypted launch and recovery points of the DJI drones used by Ukraine’s soldiers. The Russians have then directed artillery and missile strikes to these locations. In response, the Ukrainians switched launch tactics (staying low around a launch or landing site) and are rumored to have hacked the drones’ onboard firmware. They are also frantically sourcing replacement drones built in the US and Europe. Under pressure, DJI stopped selling its products in both Russia and Ukraine at the end of April.

So far, Ukraine is successfully using a stop-gap mix of homegrown and commercial drones acquired through crowdfunding. An example of this (and the inspiration for this post), was the efforts of a Toronto pilot to find and ship a drone meeting the requirements of his friend in Ukraine. 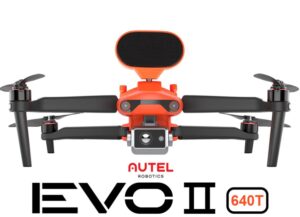 The Western Drone Calvary
With the help of his friends in the Buttonville Flying Club, the pilot in Toronto raised the money to purchase and ship to Poland and then Ukraine a US made Autel Robotics EVO II Dual Rugged Bundle V2 ($9,249.00 CAD). It has state-of-the-art capabilities including a high-resolution thermal imaging camera. Drones just like this one will need to hold the line until the widespread deployment of western military drone systems.

American and other western allies are already upgrading Ukraine’s ad hoc drone force with a host of military spec UCAVs (Unmanned Combat Aerial Vehicles). On the low end, this includes cheap new kamikaze Switchblade, Phoenix Ghost, Pholos 1 and other small drones built for single use strike missions. On the higher end are reusable hardened observation and strike drones such as the MQ-1C Gray Eagle (similar to the TB-2). Just as important, Ukraine is now receiving modern long range western artillery able to utilize GPS coordinates to hit targets spotted by a drone with amazing accuracy.

A Call to Action
If you have ever wondered what you would have done to stop the rise of the Nazi party and Hitler before the Second World War, hopefully you would be doing what the citizens of Ukraine are doing. The Russian invasion of Ukraine is illegal, criminal, and must be stopped. If Ukraine falls, a nuclear-armed Russian dictator will be emboldened to strike at other peaceful nations. Some, like Moldova, are already in his sights.

Supporting the delivery of drone technology to Ukraine is a powerful way for a common citizen to contribute to the defence of democracy. The members of the Buttonville Flying Club that donated towards purchasing the drone are proud of the small but meaningful action we have taken.

Explained: Who are the elite Ukraine IT forces that stopped the 40-mile Russian convoy heading to Kyiv? (firstpost.com)