By Mark Brooks
Did Jennifer O’Connell, Member of Parliament for Pickering—Uxbridge, or someone on her staff, give lobbyists and other interested parties a sneak peek at a then-confidential Transport Canada report? The million-dollar consultant’s report, called the Pickering Lands Aviation Sector Analysis (ASA for short), suggests breaking ground on the new airport in 2026, building in stages from a small industrial airport in 2028, with a specialty passenger airport as early as 2029, finally growing to a significant passenger airport by 2036.

Having a sneak peek at the report would have given the lobbyist, including Land Over Landings, an unfair edge in spinning a narrative on the report’s suggestion to break ground on an airport in Pickering in 2026. 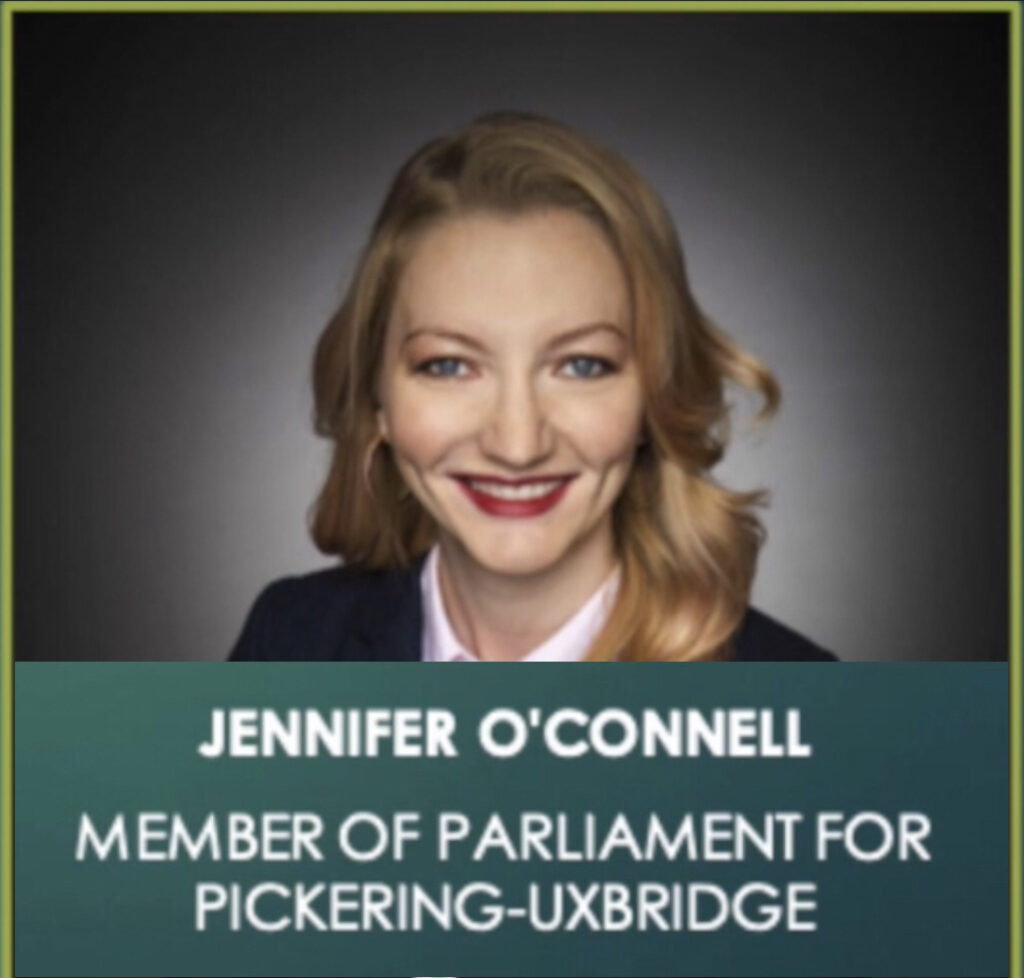 The federal report was eagerly awaited by civic leaders, including the mayor of Pickering and chair of Durham region, who did not get an advance look but had asked for the report to be made public. A heavily redacted version of the report was finally made public by Transport Canada March 5th, 2020.
Within an hour, the Land Over Landings lobby group released and commented on what appeared to be well prepared statement from the MP carefully misrepresenting the contents of the report. The MP then posted the same statement to her Twitter and Facebook accounts.

Both go out of their way to confuse the need for new passenger capacity with the need for the airport itself. The MP even quotes a date of 2038 even though that date never appears anywhere in the report in connection with the airport. This is discussed in a  previous post.

How did the MP and a Lobby group manage to review a 492-page report and prepare a press release and statements in less than an hour?

In contrast, after taking a day to review the reports contents, the mayor of Pickering made this statement on March 6th about the ASA report. In an article in the Durham post the mayor states:
“First, the question was ‘if’ an airport was needed. That question has been answered—there will be a need for an airport. Then the question was ‘when’. That has been answered today—we need to get ready for 2036,” said Pickering Mayor Dave Ryan

In a startling revelation in an email sent to constituent Bob Wilson on July 31, 2020, the MP states:

“The KPMG report was released to the public in June 2019, which was obviously prior to Covid “

The full email exchange is documented in this previous post on misinformation being used to stall the airport.

Was this a misstatement? A white lie to dodge the perception of profiting from a crisis by misrepresenting the report’s contents while aviation workers battled on the front line of the pandemic? Did the MP herself get a copy a confidential government report from the Minister of Transport (then the honourable Marc Garneau ) and accidentally or knowingly “make it public” to a select few supporters, including a lobby group and a land developer before its official release? While Transport Canada may have taken delivery of the final consultant’s report in June 2019, it did not make it public until March 5th 2020, just as the pandemic was taking hold. An unredacted version has never been made public.

The lobbying to stop the construction of the new airport has been intense. One of the lobby groups that has a close relationship with the MP, Land Over Landings, represents the current leaseholders who want to extend their leases on the billion dollars’ worth of government owned land the airport will be built on. They have been lobbying for an extension to create 30 years non-cancellable from the current 10 years leases that can be cancelled with one year’s notice. The majority of the land is leased by five commercial farms who are believed to be financial backers of the lobby group. Several of the executive of the lobby group, including its chairwoman also have leases.

The MP has a long history of supporting the efforts of the Land Over Landings lobby group. In December 2018, the MP set up a series of meetings with federal government officials for four members of the lobby group’s executive to pitch canceling the airport. One was with Transport Canada representatives, including the Transport Minister’s special assistant. Another was with MP Wayne Easter, chair of the Finance Standing Committee. The MP also organized a meeting for the group with Lawrence MacAulay, Minister of Agriculture.

During this same time period it is believed that the door was closed to local elected civic officials who repeatedly asked for meetings to discuss fulfilling the Mayor of Pickering’s 2018 campaign promise to build the airport (the mayor won in a landslide). With private investors standing at the ready what was the holdup? Why not just get out of the way and let free enterprise build the needed infrastructure?

On its website, in an attempt to rewrite history, Land Over Landings (nicknamed LOL by locals due to their lobbying tactics and attacks on pro-airport politicians) provides a carefully-crafted narrative of the timeline around the events connected with Pickering Airport. It highlights the meetings and credits the MP’s role in setting them up. While inaccurate, missing key events and biased against the airport, it contains a startling note on the ASA report being delivered to Transport on June 16th, 2019. While it was believed that part of the report had been completed in 2017-2018, and there was speculation that it was complete and being withheld, the exact date of completion was not public knowledge. So how did LOL get this information?

During the October 2019 federal election, LOL spent thousands of dollars on radio ads and its executive posted about working on the MP’s campaign. Donations to lobby and special interest groups have been used in the past to circumnavigate Canada’s election laws that prohibit corporate donations and place a cap on political donation by individuals. Was a pro-airport report being suppressed to avoid complicating the MP’s political narrative and reward supporters during a re-election bid? Only to be released the following year under the cover of a pandemic?

Having early access to the ASA report would have given the lobbyists and land developers an advantage over the elected civic leaders, provincial and federal officials who did not have such access. A developer making a risky MZO request of the Ontario government, then unaware of the airports timeline, might have been one result. Did the MP intend to undermine the democratic process of government or was it a mistake? A comedy of errors?

Several land developers have been key donors to the MPs election campaigns.

Recently, it has become known that one developer is proposing building a subdivision on land directly underneath the main approach path to the new airport. Other developers, who understand that the airport is going ahead, have spent millions designing new home developments away from noise sensitive areas and “supersizing” water and sewer lines that will be needed by the airport.
The ASA report presents both a compelling business case for breaking ground on a new utility airport as well options on when passenger capacity could be added. However, you would never know that if you look at both the statements made by the MP and the lobby group on the morning of March 5th 2020 when the 492-page report was made public.

It is no secret that eastern Toronto region needs a new industrial utility airport. The hangars at Buttonville are full and Oshawa airport is culling a flight school to reduce noise and congestion for the tens of thousands of people now living within a 2 km radius of its small land-locked airport. Aircraft movements at Oshawa are already above pre-pandemic levels. With the region set to double its population in the next 20 years and a golden age of net carbon neutral aviation underway, a new utility airport is seen as critical to the region’s prosperity, and to reduce noise. Local civic leaders see accessible aviation in the eastern GTA as an important step in creating new local jobs and reducing long commute times.

The MP refuses to answer questions on her opposition to the airport or talk to pro-airport supporters. On Oct 21st 2020 FOI (Freedom Of Information) request A-2020-00344 / DM was made to Transport Canada for all correspondence with the MP regarding Pickering Airport. This should answer a number of questions including when the MP had access to the report, if she was advised on its contents and its confidential status. Five months later, despite a legislated timeframe for responding to an access to information request of 30 calendar days, the request is still pending.

Pickering may need an airport by 2036: KPMG – Durham Post

Who is funding Anti-Airport Politics in Pickering? – Friends of Pickering Airport

2 thoughts on “Did A Government MP give lobbyists a sneak peek at a confidential report?”