The GTAA’s new master plan increased its maximum capacity by 20% without building any significant improvement to its airside infrastructure. How is it achieving this magical increase?  During a 5 minute discussion after a public meeting on December 6th,  Michael Belanger, GTAA director of “Aviation Programs & Compliance”, explained it by using Heathrow as an example. It appears that the GTAA is ignoring its capacity issue by simply changing the model it uses to calculate its maximum capacity. That model is based, at least in part, on the experience of congestion management at Heathrow airport. These techniques of congestion management have been made infamous at Heathrow airport in the UK over the last decade.

What is Heathrow style planned congestion?  Congestion is the most visible consequence of operational inefficiency at an airport like Heathrow. It is accepting a reduced reliability and robustness of air travel. It allows even a small hold up, or marginal weather event at one airport to ripple across the system with delays or missed connections.

The GTAA is now planning for 100% runway utilization 17 hours a day, with no slack. This approach leads to planned congestion and 0% growth at some point in the future. With no slack in the system, there is no capacity to deal with unexpected events such as bad weather, delays at other airports or safety concerns such as turbulence or unruly passengers. The pressure on flight crews is also expected to increase. Gone is the margin of error that pilots expect today. Will a pilot still abort a bad landing when he knows there is no slack in the system that will allow him to overshoot and try again?

Heathrow is a maxed out airport on the other side of the Atlantic where half of all arriving aircraft enter a hold before landing. Heathrow should not be Toronto’s model. It is operating on different rules, using different pavement, with milder weather, more homogenous flows of traffic and with different noise abatement procedures. After a decade of being London’s chokepoint, it is also in the process of expropriating land and expanding. Is this solution also in Pearsons future? 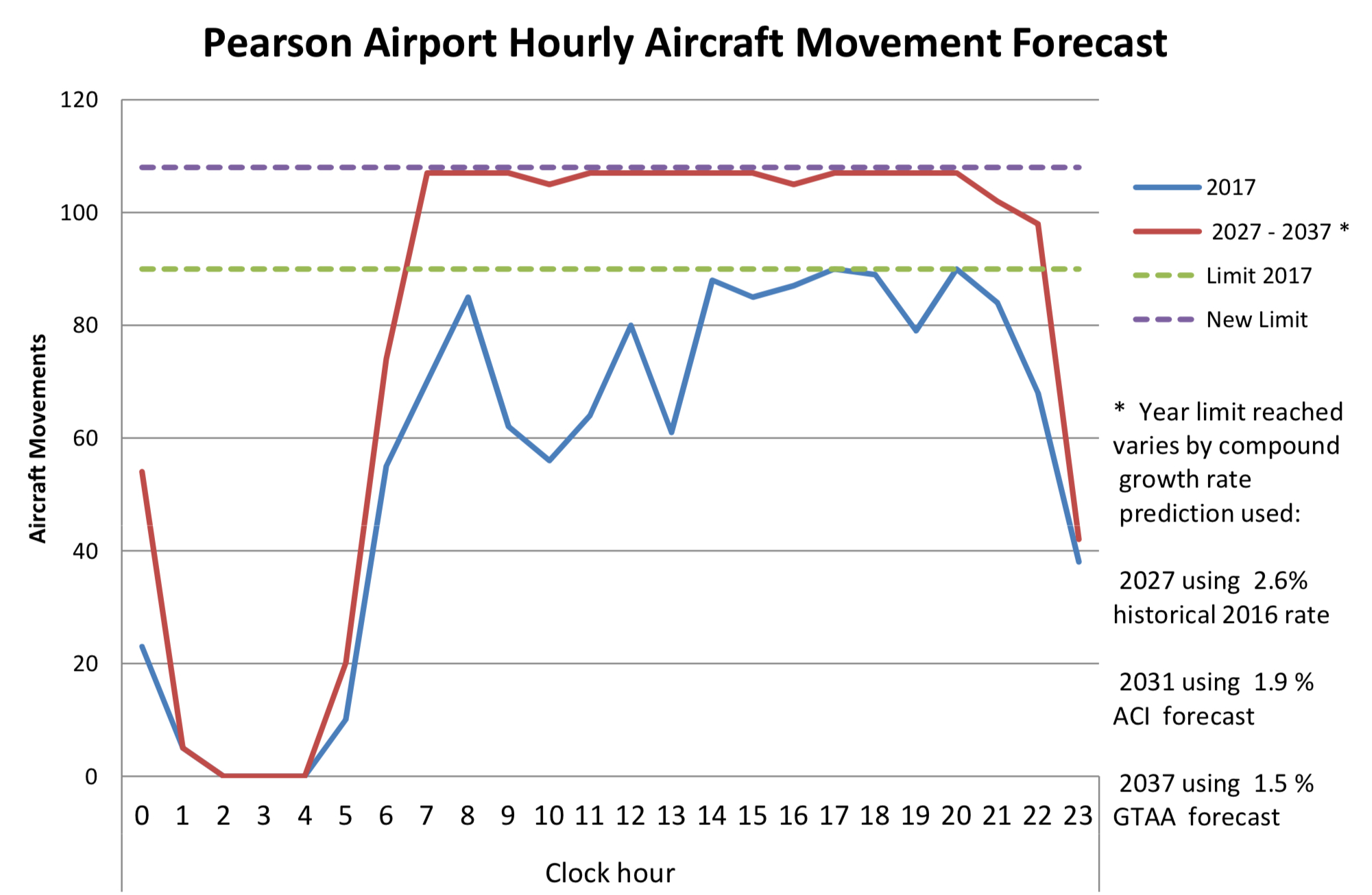 The above graph, utilizing data from the GTAA 2017 master plan, shows best case aircraft movements by the hour with good weather and utilization of the east west runways.  The GTAA’s predictions are based on a low 1.5% CAGR (Compound Annual Growth Rate), only half of the actual rate in 2016 and 2017. The GTAA is using a growth rate lower than the ACI (Airports Council International ) forecast of  1.9%. Given the growing popularity of air travel, and that Toronto regions population growth is well above the Canadian average, the GTAA’s low growth rate estimate is interesting and no explaination is given for it.

So why use the 1.5% rate?  By using this low rate,  and increasing the max capacity limit,  the GTAA can claim that it will not be full for 20 years.  Would publicly admitting that Pearson is at capacity before that create issues with renewing its multi-billion dollar debt?   Would it put the GTAA’s exclusivity clause of  its lease of Pearson from the federal government at risk?  We do know that Section 44 of  the Pearson airport lease inhibits the government from developing another large international airport within 75 km, as long as Pearson has the ability to meet capacity demands. Is this the real reason for the strangely low growth projections and new higher capacity estimates?

Using Pearsons own historical growth from 2016/2017 the airport reaches its new higher limit as early as 2027. The dotted purple line is the new thinking, the green line is the current maximum from the GTAA’s 2008 master plan.

The data is clear, In the near future, our elected officials need to step in and do the right thing. Planned congestion is not an appropriate way for the GTAA to meet its contractual capacity obligations.

It is time for Pickering airport.

One thought on “Managed congestion- the GTAA’s answer to its capacity problem.”